Mobile app UI trends that you should follow in 2020 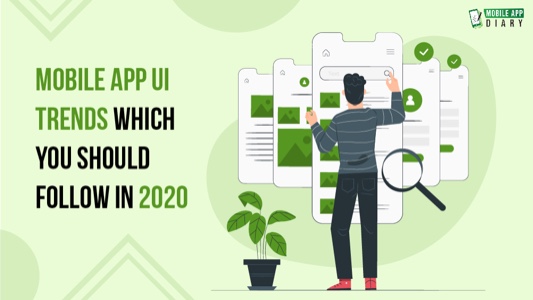 Whether you believe it or not but UI is the first element that decides the capability of a mobile application. It’s 2020 already and ever since the inception of mobile applications, we’ve come across some of the greatest breakthroughs in mankind and mobile app UI trends.

Mobile app development companies nowadays invest a great amount of time in order to offer their users the best possible services. Users nowadays are becoming more inclined towards well-rounded apps, which is the reason why they don’t seem to appreciate apps that are laggy in nature.

Since we are a part of an ever-growing industry, we thought this could be the right time to enlist some of the most amazing UI trends which you as an app developer should be aware of.

Users nowadays believe in ease of access and what could be better than offering them the same. We are talking about voice assistants. Siri, Google Assistant, Alexa, and Bixby are some of the best examples of such technology. Since you want to keep up with the trend, making an app with voice assistant capability is the way to go.

If you want to offer your users the best possible experience, then do make sure to incorporate operative animations. Animated motions deliver lots of data, we can easily understand the actions, interactions, and rhythm of the application. As mobile apps are becoming more advanced and quick, you as a developer can make things act in the favor of users by using enhanced animations.

Dark theme is one of those things that users appreciate the most in an app or in the OS in general. We witnessed the dawn of dark themes on Android 10 and iOS 13. What makes the dark theme more preferable is the fact that it doesn’t take a toll on the device’s battery and reduces strain on eyes.

90% of the world population is using large screen devices, but sometimes things get complicated while using such devices. Large display phones bring in complications as they mess around with the natural functioning of our hands or we should say thumb in particular. Hence, the idea of bottom navigation becomes an industry standard for mobile app developers to provide their users with gestures and accessible options.

So those were 5 of the most amazing mobile UI trends which you as an app development company or an app developer should be aware of. If you want your app to reach millions of users and solve their respective issues then incorporating the aforementioned trends would be the best thing you can do.

Meenakshi Mamgai is a fanatical writer with a keen interest in emerging technologies. She loves to write precise and well-researched articles to make users aware of the latest updates and trends.

Factors That Determine the Cost to Make an app in 2021

What are eco-friendly gadgets?

Four Qualities of a Reliable Managed Detection and Response Services

7 Gifts Ideas for your Tech-Savvy Friend