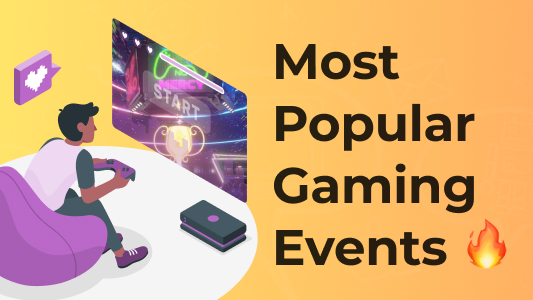 The past year or so has been a whirlwind for everyone. Many people from all corners of the world have been confined to their homes or forced to isolate, which means that they ultimately had a lot of time on their hands. It also means that this would have been the perfect time to get stuck into online gaming, and more particularly esports.

Not only can you improve your gaming skills and knowledge, but you can also win some money too, especially if you decide to bet on specific games on sites like VamosGG. If there has ever been a perfect time to get involved with online gaming, it’s now.

As the world is starting to get back to normality, you may want to learn about the different gaming events that you can look out for throughout the year, so you can broaden your horizons when it comes to this amazing industry.

That’s right! It’s back again. One of the biggest tournaments in the esports world will be bigger than ever this year. The League of Legends World Championship tournament is being held in China and will see a total of 24 teams battle it out for the ultimate prize when the grand final takes place on November 6th. As it stands right now, the prize, starting the tournament, is $2.225 million, but this is only expected to grow further as it doesn’t start for several months yet.

The winners of the scaled-back tournament in 2020, which also took place in numerous cities across China, were won by a team from South Korea called DAMWON Gaming, so they will likely be back for this year’s tournament to defend their title from their eager opposition.

Otherwise known as the Evolution Championship Series, Evo, is also a popular gaming event that you should look out for this year. Regardless of whether you are competing yourself, or if you are watching exclusively via their official Twitch streams, it is the perfect time to get involved with this type of online gaming. Evo celebrates the idea of fighting games such as Street Fighter V, Mortal Kombat 11, and Tekken 7.

Due to take place in August 2021, many fans will be brushing up their skills as they eagerly await the return of a big gaming tournament like this. As there was no tournament in 2020, gamers will be anxious to make a name for themselves on the biggest stage in gaming.

Not only is gaming back, but football is too. And what better way to combine the two by playing a massive game of FIFA? As well as receiving the title of FIFAe World Champion, you will also be rewarded with a great cash prize, and you will be invited on a trip to The Best FIFA Football Awards. Competing in a regionally-focused online structure, every player that enters will have the opportunity to qualify for the FIFAe World Cup during the play-offs at the end of the season.

The first-ever winner of the World Cup was Thiago Carrico de Azevedo from Brazil in 2004 and the most recent champion was Mohammad Harkous who resides from Germany and that was in 2019. So, make sure you check out this event if you want to see who receives the top prize at the biggest online football tournament this year.

Taking place in Stockholm, Sweden in August, The International will be returning once again, much to the excitement of Dota 2 fans and gamers. Starting with the group stage, teams will advance through the rounds in the hopes of making it to the grand final, which has currently been scheduled for August 15th. A feature that is different about this year’s tournament is that the event hosts have introduced something called the Supporter’s Club, which allows fans to directly support select Dota 2 teams by purchasing in-game items.

Though the idea of gaming will draw people into this event, the prize money is likely to have something to do with it too. With a cash prize of $40,018,195 at stake, every gamer will need to take as much time as possible to improve all areas of their game if they want any chance of being able to battle it out at the grand final.

After this turbulent year, these esports gaming events are sure to bring back a smile to the millions of fans around the world who can’t get enough of this activity. So, by either checking them out online or physically attending them if safe to do so, savour this moment and take in every emotion that you are sure to feel at your chosen event.

How AI Will Revolutionize Your Digital Marketing