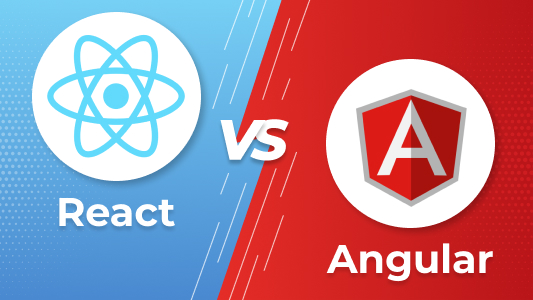 Mobile app development is one of the most interesting and innovative things one can do when they have deep technical knowledge about the same. To be precise, mobile app development is the process through which an app is made for mobile devices. Usually, the popularly determinant factor of a mobile app is which operating system is going to run it. However, the actual question is whether one uses react or angular to build their mobile app. Furthermore, which is the better option?

React and Angular are both impeccable tools created by big names, and both tools are capable of producing top-notch apps. But as in any case, in-app development too, one is better than the other. Today, let us take a quick look at both the tools in detail and decide which should be a developer’s first choice while creating a mobile app! We shall put an end to this age-old (or well, maybe not that old) debate by comparing features, benefits, and a few other essential aspects. So, let’s dive in without further ado!

React vs. Angular – the Best Choice for Mobile App Development

Before deciding which tool is a better choice, we must have a good idea about the tools. React, and Angular are both forms of Integrated Development Environment, better known as IDE. IDE is software that combines different development tools into a single Graphical User Interface, or GUI. To be concise, IDE is a complex yet holistic tool that provides more convenience for a developer. That being said, here is a crash course with everything you need to know about React and Angular.

React is an IDE that is hosted by Facebook, and it is an open-source JavaScript. React is used for building robust UI, and it is used by many. This framework utilizes reusable HTML elements for app development. React does really well and is famous with many developers for several exciting features, and for the fact that React ensures that a code is easy to understand and launch.

Supporting Tools and Integrations for React

● Facebook– One of the world’s largest social media platforms uses React. Facebook also happens to be the owner of the IDE. Over billions of people use the application daily from their phones.

● Tesla– The app Tesla Motors is built on this environment as Elon Musk’s choice was React.

● Netflix– One of the most outstanding streaming services uses React as its foundation. Much like Facebook, several people use Netflix from their phones daily.

● Dropbox– One of the most crucial online storage applications that many people trust with their documents, also happens to use React.

● Airbnb– Traveling apps are quite easily super important when it comes to choosing reliable stays. Airbnb, being a pioneer lodging tool, relies on React.

● BBC– The leading news agency which sees several global visitors each second uses React to make their apps accessible to the masses.

Angular is an IDE that is formed by Google, and it is an open-source front-end development venture. The framework is compatible with code editors, and by using HTML as a template language, Angular enables developers to make robust apps. The JS framework Angular features also support Model-View-Controller or MVC programming structure.

Supporting Tools and Integrations for Angular

● PayPal– One of the most notable finance apps uses Angular.

● Google– The master of all search engines and many other tools that one uses every day. Google relies on Angular for all the apps it has, making billions of people use Angular every passing second.

● Adobe Fonts– A branch of the Adobe franchise. Adobe Fonts acts like an online library of fonts that thousands of people access daily.

● Lego– The Danish toy company uses Angular as a base for various games and other apps.

● The Guardian– One of the best-known news agencies globally, The Guardian is used for legitimate news by billions. This news agency too relies on Angular.

Angular or React, Which is the Better Pick?

By now, we all have a decent idea about both the IDE’s and perhaps, can even make judgments on the two. So, how do these two compare in different aspects? Is one ultimately better than the other? Or do some parts surpass the other when it comes to it? Let’s find out!

Learning about a tool is the most crucial aspect of using a tool. So that later on, no step baffles the developer, and the app-making procedure is smooth.

One of the best things about React is that the developers do not have to deal with any logical structure, thus no complex learning curve! At least in the initial stages, no developer needs to know the intricacies of React. As time passes by and app development becomes complex, then the learning comes into play. This is why React is relatively popular among new developers.

On the other hand, Angular is comparatively complex, and it takes some time and effort to learn and master. The IDE is diverse, dynamic, and capable of solving the gravest issues in app development. On top of that, the results are excellent as well. That being said, it is only natural that the learning curve is rather steep with Angular. But the outcome is favorable too.

So if we had to keep a score, React takes the point for being easier to learn.

Code maintenance is somewhat simpler in React. While bettering code quality, react also provides an identity. React also provides Linters, which follows stringent regulations and a stable code base consistency. This ensures that code reviewing is easy for the developers. Additionally, React generates coding procedures to better the experience.

AngularCLI is used by Angular to better the code quality. Angular ensures that the code quality is par with the developers’ expectations through integrations like Angular material and Angular core. The result is a smoother built that eliminates the need to redo the work again.

Angular does a tremendous job in utilizing two-way data binding by simplifying the complicated chore. The sync of two elements is always assured with Angular.

React, on the other hand, uses a library framework. The framework is built to handle one-way data binding. The developers handle massive and broad handling tasks, eliminating the need to put in wasted efforts towards managing complex objects.

Performance is something that is subjective and varies from one user to another. However, considering the only parameters is the best outcome, here is what we can see.

Angular has a crisp, smooth, and excellent quality outcome. As much as the environment may seem overwhelming and complicated, the overall effect is brilliant and is perhaps worth the effort one has to put in initially. The best factor is the constant ability to solve issues on a deeper level, which makes Angular win hearts.

React is a relatively simple experience, but the outcomes are simple too. The results will not be as insanely well made as Angular, but the user experience will be more enjoyable.

Languages help in formulating codes that ultimately make the apps what they are. Both the IDEs use different codes, and the same reflects in the app that they are making.

React uses JavaScript and thus further uses JSX, which is an extension of the syntax that makes the JS code look like it was written in HTML. By doing this, the code becomes more readable and easy to understand, which consequently enables the developers to detect any errors, like a typo manually. React also uses Babel, a translation tool for code, which does exactly what it indicates. Babel translates the code for the developer’s perusal.

Angular uses JavaScript or TypeScript. TypeScript is a code option that is easy to use and compact in nature. Therefore, spotting errors, typos, and other such discrepancies is easy. This is very beneficial for large-scale projects as there is minimal scope for making errors.

Angular is very efficient when it comes to handling single pages. However, there seems to be a slight issue when multiple pages are concerned. An app usually does not perform too well if the page takes too much time to load. The bundle file must be initially optimized for it to work conveniently. Angular has not seen much success with that.

On the other hand, React does tremendously well with multiple pages. The app is capable of bringing out the best by optimizing the augmented bundles. Therefore, multi-page apps made on React take less time to load and functions rather effectively.

JavaScript coding can sometimes be tricky, and the results may not be as the developer desired or planned. This undesirable outcome can be easily avoided if the codes are tested. So how do these mammoth IDEs do that?

Isolation of unit of code is a feature Angular has written explicitly considering the issues that may arise where testability is concerned. Angular even utilizes its dependency injection to pass component dependency and simplify mocking components.

On the other hand, React enables developers to run test suites where they can run test cases. Jest and Ava are two such test runners who keep running tests even while the development process is running. However, the test results are predictable in react, and one owes that to the existence of mocking functions.

This segment is perhaps the most interesting. The popularity of an IDE depends not just on what the developers prefer but also on how the application has been developed. So, one can dig up both environments’ history and see the popularity both the IDE has had over the years.

Angular has had a consistent base throughout the years. However, in recent years, the demand has spiked among developers. Therefore, we can see stability yet progress as well.

On the contrary, React has had a low demand for a very long time, and then a sudden spike has taken over the growth of React. We can safely conclude that React sees sudden need and love from the developers.

To be honest, there is probably no way to declare one the best as opposed to the other. But if one had to pick, then perhaps React is a good choice for new developers and people who are making relatively easy applications for simple usage. However, if one is making a robust application and is an experienced developer, Angular is a better pick.

App development sounds overwhelming, but it is a very enjoyable and easy thing to do with the correct combination of passion, interest, and knowledge. We hope this article was helpful to you, and you will find the best environment to build your app upon.

How to hire the best software developer for your next project?

Factors That Determine the Cost to Make an app in 2021