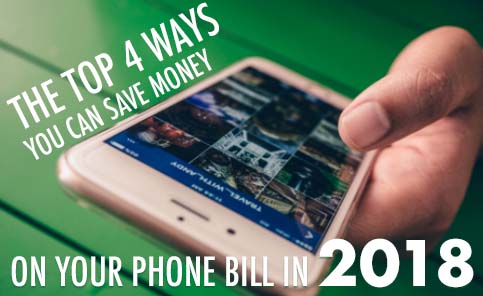 Last year, 2017, saw unprecedented levels of change in the phone industry. A fundamental shift has started to appear in how people are interacting with their telcos. The results have started to appear in surveys and analysis around the world. Where, in the past, people bought phones under contract from their phone companies, they are now buying the phone themselves and tailoring their solution more precisely to their needs.
Buying a phone outright and adding a cheap SIM to it can save users hundreds of dollars over the lifetime of the device. Source: pexels
So, what can you do to save yourself money?
Luckily, with 2017 and all its lessons learned now readily available for users, saving money on your phone and plan as we move into 2018 is nice and easy.

–       Buy your phone yourself: Cheap Chinese imports are now flooding the market all around the world. Typically, they use the Android operating system and, as a result, have more than 90% of all the features you’ll find in the latest flagship Android device releases from the major phone companies. Huawei, for example, have a broad range of products which cost half what Samsung, Sony or Google themselves will charge you. And they perform exceptionally well. Chinese phones tend to have dual SIM slots, too which means you can tie together multiple phone plans to squeeze more out of your dollar. This is especially useful for those who make international calls, for example. Many phone companies which specialize in niche features like international voice minutes are not the best value for data. Dual SIM facilities mean you can have one SIM for each service and move seamlessly between them.
–       Get a phone plan from a smaller phone company: Smaller phone companies, also known as MVNOs (Mobile Virtual Network Operators) or Network Resellers have happier customers and offer much more data per $ than big phone companies. There really is no reason NOT to buy a plan from these companies. Those who do get precisely the same level of network coverage and priority on the network as customers who go directly to the big brands. The plans they offer tend to be prepaid or SIM only which are simple to understand and are rarely provided with a contract. That puts the power in the hands of users who can move when they want to, based on new deals which come out. That’s not the way it works when you’re under a contract. Source: pexels
–       Know what you want: The right phone plan will have everything you want and nothing you don’t. It’s still rare to find mobile plans with unlimited data anywhere around the world (the USA is the only exception) but everything else is up for grabs. There are plans which offer data rollover facilities, free streamed audio and video services (you’ll often pay more for those) and even which refund unused data to you at the end of the month. Before you shop, make a list of what it is you want. Pick the provider which gives you all of it.
–       Use the free self-service app: Every phone company now offers a free Self Service app alongside your SIM. They’re easy to use and help both sides of the equation. To phone companies, Self Service apps are an affordable way to cut their service costs. But the research is clear. People who use their self-service apps are actually happier with the service they get from their phone companies. Self Service apps reduce the time taken to do simple things like a prepaid recharge. Instead of a long voice call, simple tasks like this can be done in seconds. Our advice is to download and use your Self Service app now.
Summing up
The power has finally started to move from the phone companies to their customers. Competition has created a huge number of options, from smaller phone companies and their bigger counterparts. Now, users can easily tie together their own tailored phone plan with minimum hassle and expense.
Follow these 4 simple steps to save hundreds – and stay tuned for 2019. The future looks bright.

5 Ways to Protect your Data from Leakage