Windows 10 vs iOS 9 vs Android M: Clash Between 3 Most Efficient OS 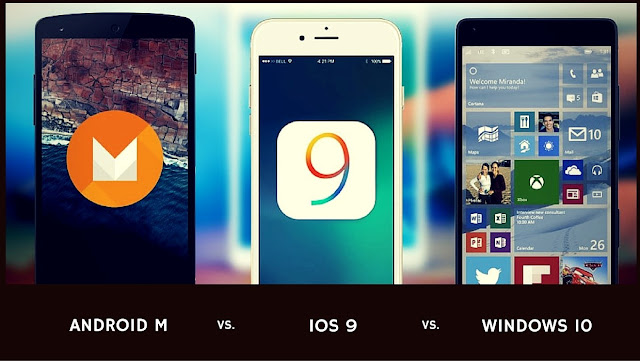 Three industry giants Microsoft, Apple and Google are in the healthy competition as all three are launched their new operating system. Microsoft reveals its’ latest version Windows 10 in Lumia 950/950 XL first time. At the same time, Microsoft’s biggest competitors Apple & Google also launched their mobile OS, iOS 9 & Android Marshmallow respectively. When all 3 operating systems are coming to you, it’s difficult to decide that which one is appropriate for you. Here, I have compared all 3 OS in every possible aspect that may help you to select adequate OS as per your use.

Windows 10 comes with live tile user interface that supports transparent tile background. Wallpaper can follow you without being distracted from the front content using transparent tile background. The latest version has a notification center that adjusts messages based on relevant category.
iOS 9 is having all features that the previous version have, along with more renowned fonts, more elegant theme & enlarged typography.
Android M is all about user-friendliness of of Mobile application. Android M becomes heir to Lolipop by adding the feature of the app drawer. Drawer shows a more instinctive app list by which user can easily jump to wanted apps.

All 3 operating systems have almost same type of customization in terms of profiles, backgrounds and account syncing. Nevertheless, each OS tries to give as much control as possible to the owner over the device.
Windows 10 is well-known because of its’ user-compatibility. Microsoft allows first time to the user to select the background in its’ windows 10 mobile. Windows 10 also authorize users to use developer mode as well.
iOS 9 empower the user with the far better customization compare to Windows 10. The user can utilize the feature of display zoom in iOS 9 but can not enter into the developer mode. In fact, there is no developer’s mode in iOS 9.
Android M is the best option in terms of customization. There are multiple options available to customize your device. Like Windows 10, Google also provides developers mode first time in it’s Android Marshmallow update.

Windows 10 arrives with multifarious, new features. Some of the more important features are Cortana, Microsoft edge, App store, USB support and other hardware features. Data syncing from mobile to PC & interchanging of stream photos and documents are the most significant features of Windows 10.
iOS 9 has many latest inbuilt features including maps, messages, notes, mail, Apple pay and Apple music. It comes with very small size than previous version. So, users can get more space to install required third-party apps. I think “Siri” is the biggest feature of this version of iOS as it is responsible for efficient response in less time. Another important features like slide over, split view and a picture in picture makes the multitasking better.
Android M having a significant feature based on Google search. Marshmallow comes with tap based Google search. Just long press the home button for search or voice command to start with it.

Non-Windows related third-party apps have become more secure in Windows 10 than the previous versions. Even built-in windows related apps are also preventing devices from attacking.
Addition to almost same security constituents as Windows 10 Mobile, iOS 9 consolidates passcode to increase difficulties for other users to access your Apple ID account and personal information.
Exceptional fingerprint option for unlocking the phone in Android M secures devices from unauthorized human beings. There is also some mutation in the sense of permitting you to an app accessing camera & other features.
About Author:
Mr. Deepak Patel is an entrepreneur and CEO of the prominent Mobile Application Development Company India iMOBDEV Technologies Pvt. Ltd. His immense experience in the field of development is enough to shape up the superior applications in all platforms including Android, iOS & Windows. He is passionate to learn the modern techniques & implement them in recent projects. He frequently releases many articles & share his thoughts and knowledge of mobility solutions.

7 Tips To Improve Your Website Security 8 Most Effective Node.js Tools for Developers