Top 5 Apps to Turn your Android Smartphone into TV

Today, smartphones are not just used for calling and sending SMS to people.Smartphones have outgrown as a means of entertainment and there are various options to keep you entertained. For people who don’t have time to watch the television shows by sitting at home in front of television can rejoice now. There are many apps available in the market which enables you to watch television shows on your mobile phone. You can either stream live TV or watch all the channels available on television on your mobile phone through apps. In this article, we have enlisted top 5 apps that can turn your Android smartphone into television. 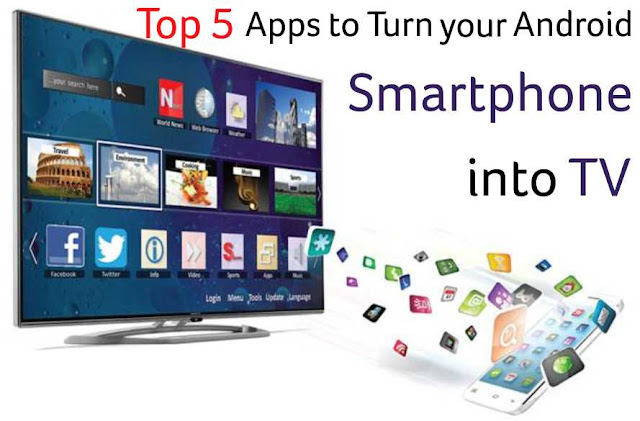 SPB TV – Download Link
SPB TV app lets you watch lots of television channels on your mobile phone. Live streaming is fast and you don’t have to wait for your favorite serial to buffer. The user interface is neat and easy to understand. Almost all the content is available without any charge, although some premium channels are also available for which you have to pay charge. The SPB TV offers a wide variety of content to keep you entertained.
Showbox – Download Link
The Showbox app turns your smartphone into a television and lets you watch all the tv channels on your smartphone. The app can be downloaded for free from their official website as this app is not available on Google Playstore yet. You can watch high definition videos and tv shows through this app on your android smartphone. The app is also available for iOS and desktop.
Crackle-Movies & TV – Download Link
Crackle app is a free application for watching television content on your mobile phone. You can watch movies as well as tv shows through this app. Crackle has a customer base of 25 million fans who use the app on their phones. Crackle has also won many accolades for being one of the best apps for accessing tv shows and movies on smartphones. The app can be downloaded through Google Playstore.
Hotstar – Download Link
Hotstar is one of the most popular apps for watching live cricket matches and tv series on your phone. Hotstar app is owned by Star India Group and offers a wide variety of content like tv shows, live sports events and Bollywood movies on your mobile phone. Hotstar also has the facility wherein you can download the movies andwatch them later in offline mode.
Popcorn Time – Download Link
Popcorn Time is a famous android app for watching TV shows and latest movies on your smartphone. The app is also available for PC, Xbox and iOS devices. Through Popcorn Time, you can watch television content in high definition without paying any amount. There is no need to sign up on the app for watching the content, you can download the app and begin watching your favourite movies and TV shows right away.
Conclusion
You can choose from these top five apps to enjoy seamless entertainment on your phone. You can search the television channel you want to watch on any of the above apps to start watching it. So you can now enjoy your movies and tv shows anywhere and anytime.