More than just a purpose, smartphones have become an inseparable part of daily lives. Thus, having a mobile app is essential for any type of business. Some companies offer their products and services through a mobile app and for some others, the business itself is based on the mobile app. Apps like WhatsApp, Snapchat, etc. are some of the fine examples. So, to make sure the app works just fine on any given device (iOS or Android), mobile app testing is just as important as any other part of the development process. 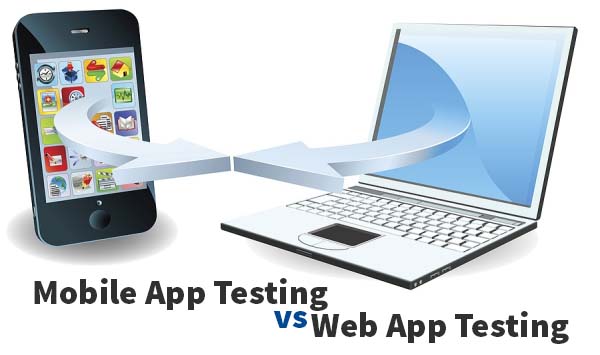 Some of the companies think that the success of a mobile app is based on the type of program and its abilities and while some believe that the difference between an app that sells and the one thinks that it can. On the contrary, there are a lot of apps that proved to be a huge success besides being simple and having limited features and functionalities.
Mobile App Testing is the Answer to the Many App Issues
Mobile app testing provides many answers to the app concerns that developers often try to prevent it from app crashing or bugs. There are ‘n’ number of things to be tested and different features and functionalities to ensure the app is free from errors and bugs.
Mobile App Testing Types and Challenges
Mobile app testing strategies make sure that the app’s quality assurance align with company’s objectives, goals, and consumer expectations.
Unit Testing
Usually, in this situations, app developers run the automated tests and each of those tests actually target a small part of the overall mobile app behavior.
Functional and Acceptance Testing
The quality analyst is accountable for this type of testing procedures or particular automated user interface testing frameworks also do some sort of magic.
Performance Testing
Normally, this kind of testing is done along with the profiling tools like CPU profiling tools. Other than this, various mobile application developers are choosing for mobile beta testing solutions in an aim to collect the information from the real usage of the same. It as well as helps them integrating application analytics for a better overall understanding of how actually and well the mobile applications works.
Challenges
— If you are developing native applications to target individual platforms, then code level testing may not be transportable.
— For mobile beta testing, there are hybrid solutions available but won’t work great when compared to native tools for performance profiling.
Mobile application testing has become an important part of the mobile application development process. Most of the issues an app experiences could be addressed via a successful mobile application testing procedure. This also enhances the go-to-market time and makes sure of the success of the app.
How mobile app testing is different than a web app testing procedure
Mobile app testing and web app testing are two extreme ends. Testing a desktop application is entirely different from testing a mobile app which actually will be utilized by thousands or probably lakhs of smartphone users. So in the process of testing a mobile application, developers need to apply various testing procedures and methods and hence, QA teams frequently find themselves in high-level challenging situations. There are some basic differences between the two testing procedures that need a better review.
How are they both different?
Mobile app testing involves more complicated and challenging testing procedures because of the diverse range of smartphones, iOSs, etc. And also, mobiles are meant for a much greater number of users. In addition, a mobile app can also be run on various other devices like Phablets, Tablets, etc.
Now let’s take a look at various technical challenges that are involved in these two testing procedures.
Storage and RAM
There are a lot of smartphones with RAM of 1 or 2 GB that come with comparatively small 16GB SSDs. Because of such serious limitations of RAM and storage space, testing procedures become more difficult, especially in terms of the huge amount of memory and storage which virtually today’s web browser accesses. In addition, advertising platform services can actually highly make a mobile browser slow and hence turning your web app to your smartphone or even a tablet can be responsible for congestions.
Mobile and the Web Offer a Different Kind of Interactions
The desktop was built almost 3 decades ago. Right from a basic mouse to browsing Facebook, the web experience is pretty the same. Whereas mobile applications present even more challenging situations. In addition to the comprehensive range of touch actions like swipe, there are voice assistants like Siri. Also, creations that particular smartphones offer to add a bit more complexities to mobile operations.
Diverse Range of Application Types
The usual frameworks for a web application are JavaScript, HTML, and CSS. There are a couple of others depending on the type on what kind of framework a developer likes to pick. But the mobile applications are not as simple as web ones. They either can be developed as native applications that are designed for smartphone browsers or even developed as hybrid applications which would be needing special platforms to use them.
Connectivity Issues
Any kind of web app goes waste unless the PC is connected to the internet. But the case is not completely same with mobiles. A few mobile apps such as games work even when they are not connected to the internet. And for others, not a full app but at least some of the features and functionalities work offline.
As such complexities increase with the differences in the web and mobile applications, the QA testing procedures also vary and become challenging with the capabilities to shelter great innovation among smartphones.
Every mobile app supports some basic operations of devices that are configured and organized to perform particular outcomes. So before performing QA testing for a mobile application, you first need to understand the conceptual architecture of a smartphone.