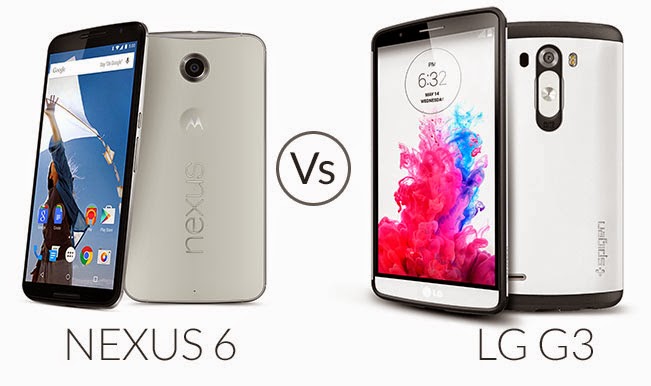 In India, with increasing competition there is a sound increase for many new devices, not just for low priced devices but even for high priced devices as well and this has created a tough war between many brands. Motorola X has been in tough competition with all other brands and one such is Nexus 6 which is on a roll over on other high end brands.
Nexus 6 is a great buzz and has been listing the charts, and Moto X is just behind to grab hold on to Nexus 6, let’s see with a well oriented distinctions as to which one is better and why ??
LG mobile phones in India have always come up with good products and LG G3 has been among the best Android smartphones and has come up with many new features and gives tough competition to all the best Android smartphones, Nexus 6 is one which gets a tough one from LG G3.
If we see the DISPLAY; LG G 3 comes a QHD screen and so does Nexus 6 but Nexus 6 comes with a AMOLED screen and a bigger screen. Both the devices have the same pixel resolution but the density is high for LG G 3. So for both the mobile phones, if we see it display is almost same just that the AMOLED feature for Nexus give some extra points to it.

Then comes the DESIGN of both the devices, Nexus 6 is not much of a change in comparison to LG G3, as LG G3 comes with amazing look both back and front, LG G3 has a bezel less look and specially the ring flash. For the design LG G3 bags on to Nexus 6 and will win your hearts over.

If we talk about the SYSTEM, Nexus 6 will be coming up with Android Lollipop and is certainly to be said that it will have a marvelous user experience, for LG G3 it runs on Android v 4.4 and works on Optimus UI, and Nexus is certainly going to miss a variety of softwares which are there in LG G3 like the Knock Code, multi-screen, floating mini, QMemo+ and many more. So for an overall both are interesting in their own manner but if someone wants more than they can probably go for LG G3.

For the CAMERA, both come with almost same mp for front and back cameras, but if see LG G3 comes with better camera apps and features in comparison to Nexus 6 and have sharp complexities.

With all these points we can say that both give each other a pretty good competition to oe another, but if your criteria is budget then the LG G3 is a great device with bunch of awesome features whereas Nexus 6 is quite costly and comes with almost same features as LG G3 has. LG G3 comes with two models both having different RAM and for Nexus there are two models but both of them have same RAM which is better than LG G3. Both the devices comes with a powerful configuration and are certainly the best buy.

About Author: Apoorva is a tech blogger for different topics from gadgets to lifestyle, and a passionate writer, currently working with zopper.com. Having a keen interest in writing he tries to learn all aspects of writing.