Samsung Galaxy S7 Vs Apple iPhone 7: Which One is worth buying?

With the launch of Apple iPhone 7, its comparison with Samsung Galaxy S7 is obvious. Apple and Samsung, every year, come with high end smartphones with great features. Buying these phones will give you the best smartphone experience. Let’s get more details about their specifications and features and compare them to see which one worth more for your hard earned money. 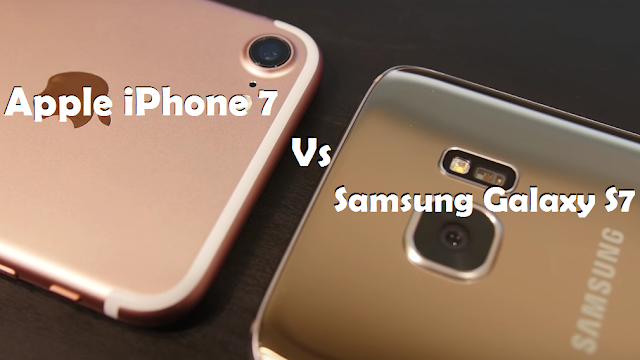 Undoubtedly, both these flagship smartphones do have a great built and premium design. Samsung Galaxy S7 flaunts a glass front and back (protected by Gorilla Glass 4) with curved metal frame. On the flip side, iPhone 7 is carved out of aluminium sheet. It carries the same old design of iPhone 6 with little tweaks like minimalistic antenna bands. When it comes to durability, Samsung Galaxy S7 is more fragile and prone to crack / break. At the same time, the phone feels more sturdy and fit when it comes to handling. Jet Black variant of iPhone 7 is one of the most scratch friendly phone in the recent past.
Another area where Samsung Galaxy S7 wins is the water resistance feature. Samsung Galaxy S7 is IP68 rated. Apple, for the very first time, arrives with an IP67 rated smartphone. The Galaxy S7 can survive under water for more time compared to iPhone 7.
Apple didn’t change its old retina HD display measuring at 4.7-inch. Now, it’s high time. But the company has overhauled the overall viewing experience. 3D Touch is present in this year’s model as well. On the brighter side, Samsung sports a bright 5.1-inch Super AMOLED display with 1440 x 2560 pixels. The display is protected by a gorilla glass 4, which adds more durability. The phone also has less bezels as compared to iPhone 7. 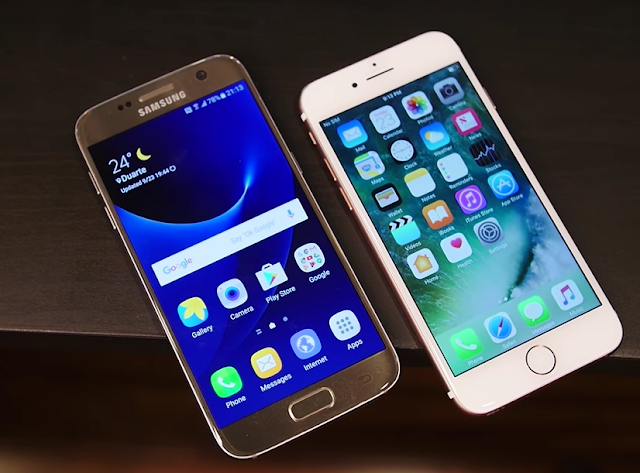 These smartphones are super fast smartphones without any lag and hang. When it comes to performance and multitasking, both these flagship devices have their own standards. The Galaxy S7 comes with two different processors – Exynos 8890 processor clocked at 2.3GHz and Snapdragon 820 processor clocked at 2.2GHz. The phone adds 4GB of RAM, 32GB or 64GB of storage, and a microSD slot for expanding storage upto 256GB.
Apple has installed the all new system-on-a-chip in iPhone 7 – A10 Fusion. It’s a 64-bit, quad-core processor, which is 40% faster than the A9. The system is coupled with 2GB of RAM. While handling some tasks, Apple iPhone 7 surpasses the Galaxy S7 and in some other smartphone activities, Samsung Galaxy S7 wins.
In this Instagramic world, one of the most utilised features in a smartphone is its camera. This is the main reason why all smartphone makers are improving and evolving smartphone camera technology with each passing year. Samsung Galaxy S7 can capture best images in low light conditions. The phone comes with a 12-megapixel camera along with a wide f/1.7 aperture and optical image stabilisation. On the front, it has a 5-megapixel camera with a f/1.7 aperture.
Now, Apple has also introduced the all new iPhone 7 with an improved 12-megapixel camera with f/1.8 aperture. There is a 7-megapixel front snapper for taking wide and clear selfies. Both the smartphones are capable of capturing 4K videos.
As these phones are laced with high specifications with great features, pricing of these phones are bound to be high. Samsung Galaxy S7 will cost you around Rs 43000 in India. On the flip side, Apple iPhone 7 (32GB) variant will cost you Rs 60000 in India. Samsung is the best option to choose at the moment as it is Rs 15000 cheaper than the iPhone 7 and has brighter display and bigger battery.
Author Biography:
Riya Sharma is working as content editor with MobileXpose.com – a mobile price & news site in India