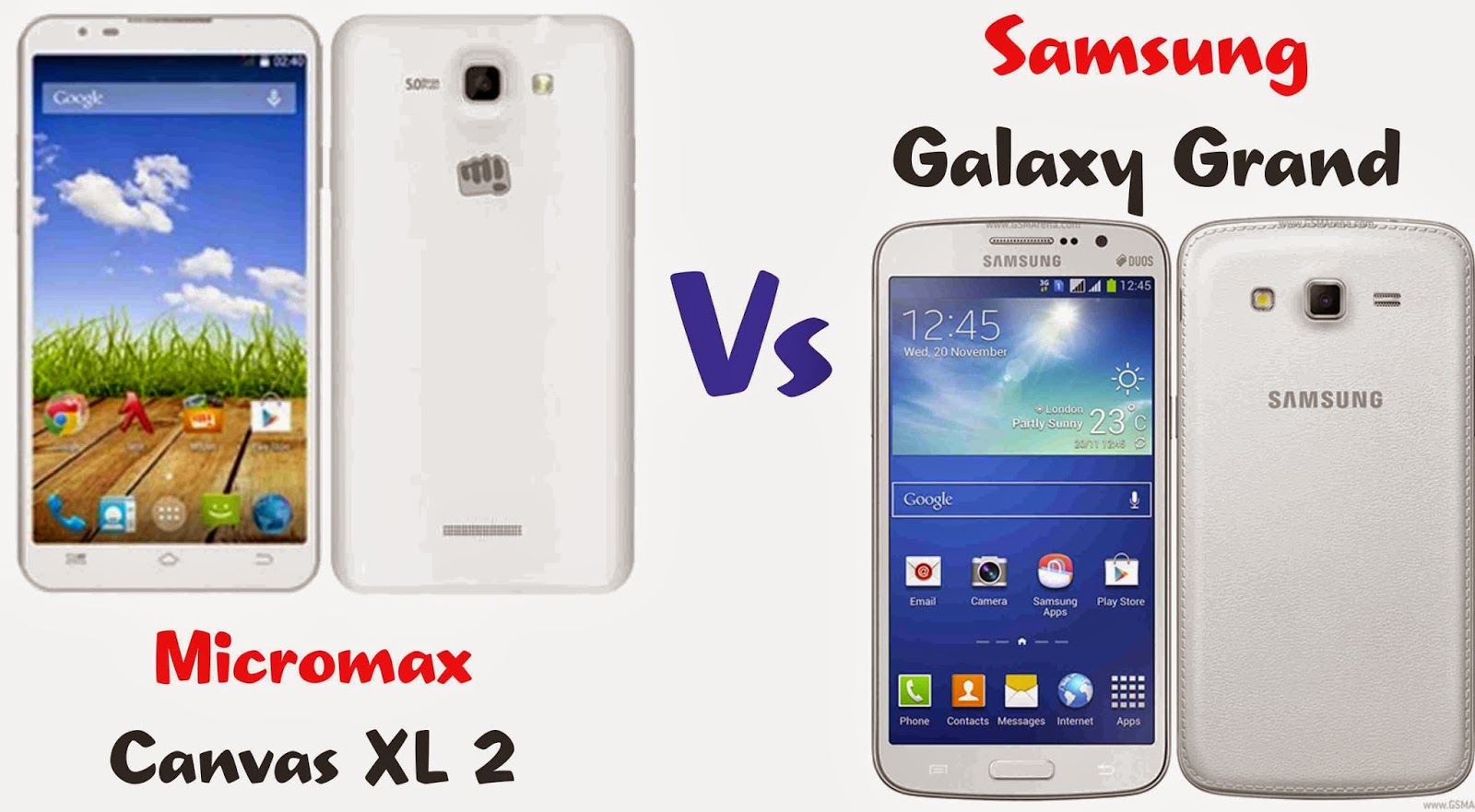 On the other side, Micromax recently came up with a new device called the micromax Canvas XL2. It offers hardware similar to the Galaxy Grand but is priced lower than that. But with the current crop of budget smartphones, these devices don’t really seem to justify their prices. There are a large number of low cost devices that offer almost similar specifications at lower price. We put these two devices against each other to see which one of them makes more sense and also see if any of these devices stands up against the rivals we mentioned.

Design
The Galaxy Grand 2 with a 5.25 inch display looks almost similar to the original Galaxy Grand. The dimensions are almost similar with the Galaxy Grand 2 being a little bigger. The device is a bit slimmer than the previous device. The design is the same dull and uninspiring design that we see on a large number of Samsung devices. The familiar rounded rectangle shape with the physical home key up front. Thankfully the quality is slightly better than most Samsung mid-range devices and you get a solid built back instead of the usual flimsy and glossy plastic back found on most budget Samsung devices. The back panel of this device is removable and it is a bit hard at times to remove it because of the large size and big tabs.
The Micromax isn’t much better either. It has got a 5.5 inch display so it is huge and it isn’t really easy to handle. Like most other budget devices, plastic dominates here. The front face is dominated by the display and below it; there are three capacitive keys for navigation and menu. The back curves near the edges just like the Samsung and has been made out of plastic. The quality isn’t very inspiring and it feels more like a compromise. So both the devices are almost even here as none of them manages to impress with the design or built quality.
Display
The issue with large screen budget devices is that they have been built after cutting costs here and there. This results in a device with a large but low quality and low resolution display. This is the exact case with the Micromax device here. The display on Galaxy Grand 2 isn’t very impressive either but still it is better than the original Galaxy Grand. It has got a 5.25 inch display with 720p resolution. The resolution isn’t bad but it isn’t very impressive either. The viewing angles are decent and it replicates colours well. The contrast ratios aren’t very impressive.
The Micromax has got a low pixel density due to the low resolution and large display size. It has got a 5.5 inch display with a resolution of 540 x 960. The numbers aren’t good here and you get a very low pixel density of 200 ppi. The pixel density isn’t good but the display is an IPS LCD panel improving the quality of display a bit. The colour saturation is good and contrast ratio is acceptable as well. The viewing angles and sunlight readability is decent.
Hardware
The Galaxy Grand 2 runs a Qualcomm Snapdragon 400 chipset with a quad core processor. It runs at a clock speed of 1.2 GHz. It comes with 1.5 GB of RAM and 8 GB internal storage. You can add micro SD cards up to 64 GB on this device. We have seen the same hardware on many other devices and it is pretty decent. It performs well and you get decent benchmark scores as well. You get all the usual set of connectivity options like Wi-Fi, Bluetooth and micro USB 2.0. The device runs android 4.3 but can be upgraded to android 4.4.2. On top of it, this device gets the Touch Wiz UI that you find on Samsung devices. It comes with an 8 megapixel auto focus camera on the rear and a 1.9 megapixel front camera. The primary camera can record videos in full HD as well. The camera quality is decent and you can shoot some decent pictures using the camera. The device is powered by a 2600 mAh battery which is fairly decent considering its hardware.
The Micromax runs a mediatek chipset with a Quad Core 1.2-GHz processor mated with 4 GB of internal memory and 1 GB RAM. Along with it you get a micro SD card slot. The hardware performance is decent and we have seen it on many other devices. You get similar connectivity options as the Samsung Galaxy Grand. It runs the latest android OS KitKat as well and the interface is close to stock. The camera duo you find here has lower resolution as compared to the Galaxy Grand 2. The primary camera has 5 megapixel resolutions and comes with a LED flash. The front camera is a VGA. It gets a fairly large 2500 mAh battery.
Verdict
It is hard to draw a verdict here. The reason is that none of the devices is very impressive. The Samsung Galaxy Grand 2 has got an average display but dull design. The performance isn’t exactly high end and the price isn’t very well justified with all the new rivals coming in. it is the same story with the Micromax. If you are going to move away from the mainstream manufacturers, you can find a large number of devices with impressive specifications for similar prices. Instead of these devices, you might want to take a look at devices like Karbonn Titanium Octane and Xiaomi Redmi Note among others.

How To Develop A Wearable App Employing Emulator Make it Ring! – an Android App that helps you find your mobile in Silent Mode [ With Infographics & Demo Video]